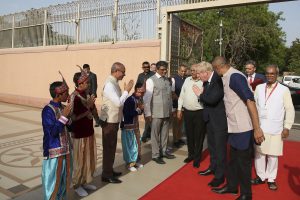 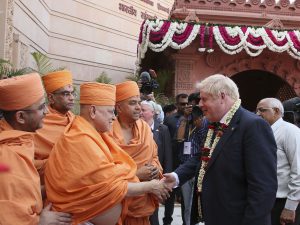 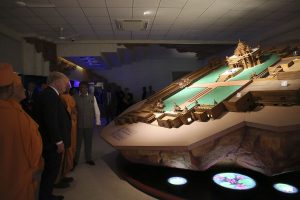 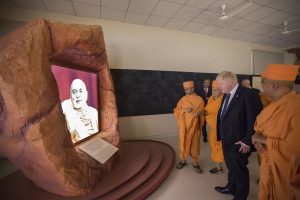 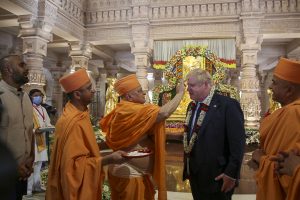 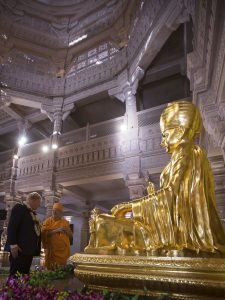 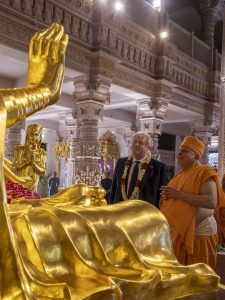 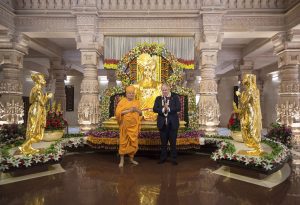 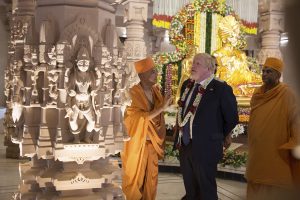 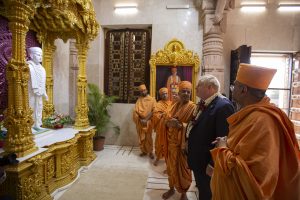 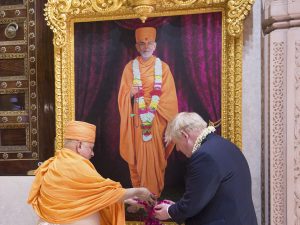 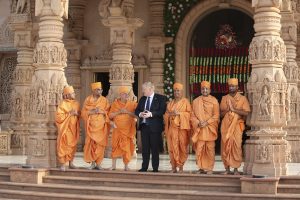 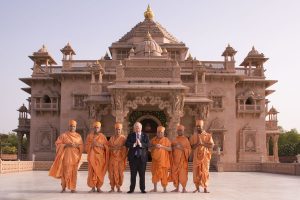 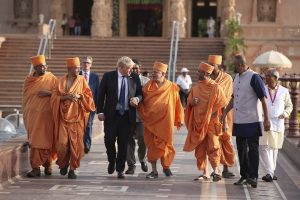 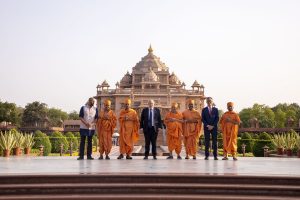 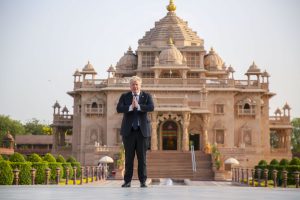 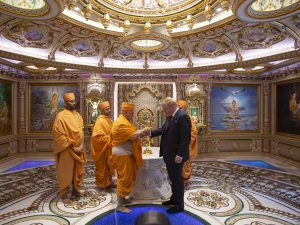 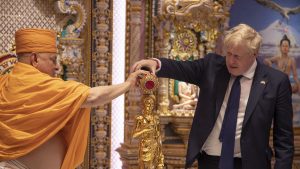 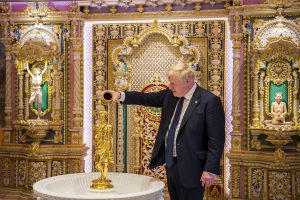 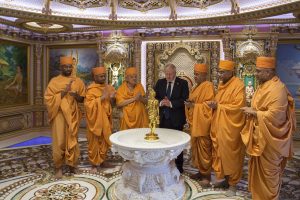 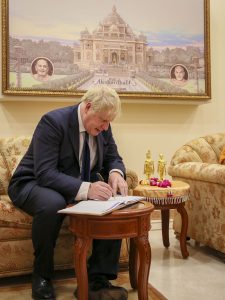 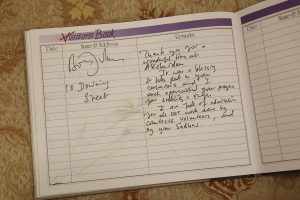 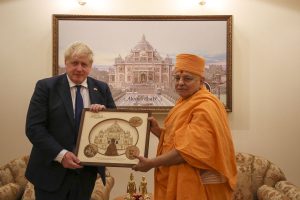 The United Kingdom’s Prime Minister Boris Johnson was greeted at the ornately carved stone Mayur Dwar with a garland of flowers by Pujya Ishwarcharandas Swami, International Convenor of BAPS Swaminarayan Sanstha (BAPS), on behalf of His Holiness Mahant Swami Maharaj, the inspirer of Swaminarayan Akshardham and spiritual head of BAPS. The Prime Minister was accompanied by Gujarat Chief Minister Shri Bhupendrabhai Patel, High Commissioner of UK to India, HE Alex Ellis. Sanjay Kara from the Neasden Temple in London was also present to welcome the Prime Minister and his delegation.
Then, Brahmaviharidas Swami gave the Prime Minister an overview of Swaminarayan Akshardham – a 23-acre spiritual and cultural complex which is a humble tribute to Bhagwan Swaminarayan (1781-1830), the avatars, devas and great sages of India. It portrays the traditions and ancient architecture of India and promotes the timeless Hindu spiritual messages of faith, devotion and harmony. The Prime Minister was overwhelmed and commented, “This is the mother of all mandirs. It is the source of your wonderful mandirs across the world.” As the Prime Minister proceeded to the main monument of the Akshardham complex, children dressed in traditional costumes welcomed him with a traditional dance while waving flags.
Inside the main monument, he paid respects to the murti of Bhagwan Swaminarayan by offering flowers, and admired the art and architecture. He learned how His Holiness Pramukh Swami Maharaj, the fifth spiritual leader of BAPS, inspired thousands of volunteers and artisans to create Akshardham to share the messages of love, peace, tolerance, non-violence, co-existence and global harmony. Prime Minister Johnson conveyed his best wishes for the ongoing worldwide Pramukh Swami Maharaj Centenary Celebrations and the grand 30-day festival to be held in Ahmedabad from 15 December 2022 to 13 January 2023.
From here, while appreciating the messages of peace, world harmony, social uplift and personal integrity of the exhibition halls, the prime minister went to the abhishek hall where he performed the abhishek (ritual pouring of water) on the murti of Shri Nilkanth Varni Maharaj, the teenage-yogi form of Bhagwan Swaminarayan and offered prayers for world peace, progress and harmony.
PM Johnson shared, “Every time I visit a BAPS temple I am uplifted and feel a sense of deep spirituality. All of you, by your selfless work, values and goodness, are contributing in an amazing way towards world development.”
PM Johnson wrote in the visitor book, “Thank you for a wonderful time at Akshardham. It was a blessing to take part in your ceremonies and I much appreciated your prayers for stability in Europe. I am full of admiration for all the work done by countless volunteers, and by your Sadhus.”