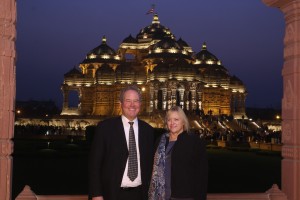 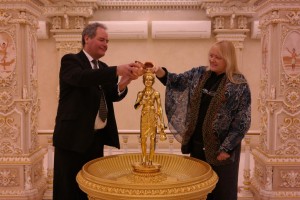 British MP Robert John Blackman, better known as Bob Blackman, from Harrow East in the UK along with spouse Mrs. Nicola Blackman visited Swaminarayan Akshardham in New Delhi to experience India’s ageless beauty, borderless culture and timeless values.  Both Bob and Nicola Blackman are regular visitors to the BAPS Swaminarayan Mandir in London, which they have been supporting for more than the last 20 years.

On behalf of His Holiness Pramukh Swami Maharaj – the inspirer & creator of Swaminarayan Akshardham and Spiritual Head of BAPS Swaminarayan Sanstha –  senior sadhus traditionally welcomed Mr. Blackman with a garland of flowers, chandlo (vermillion powder) and the tying of the sacred kalva (sacred thread).

After admiring the Mayur Dwar (Peacock Gate), the Blackmans made their way to the Swaminarayan Akshardham Mandir where they witnessed the world’s ‘Largest Comprehensive Hindu Temple’.

The Blackmans offered prayers for world peace and harmony by offering ‘abhishek’, the ceremonial pouring of sanctified water from 151 holy rivers, lakes and ponds across India on the sacred image of Sri Neelkanth Varni

Thereafter the British MP and his spouse experienced the educational exhibitions: Sahajanand Darshan (Hall of Values) – robotic shows depicting the ideals of nonviolence, honest, harmony and faith, Neelkanth Darshan – a Giant Screen film on the epic journey of Neelkanth Varni throughout India and Sanskruti Vihar – a cultural voyage that sails through 10,000 years of India’s glorious heritage, highlighting India’s contributions to humanity through the ages. Finally, they witnessed the Sahaj Anand Water Show, a theatrical presentation about an ancient Upanishad story with modern fountains, projections, lasers and fire.

Sharing his experience at Akshardham, British MP Bob Blackman wrote, “Thank you for a wonderful experience. This is truly one of the wonders of the world, combing the lessons of history with modern technology. I have been privileged to be involved in the development of the Neasden Temple in the UK.  This experience surpasses even the wonders of the Neasden Temple.  I am proud to be an Honorary Hindu and this is truly an amazing dedication of voluntary effort to create this magnificent mandir. ”