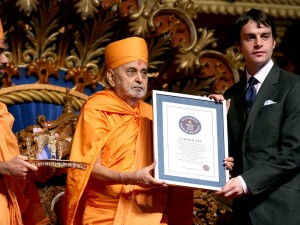 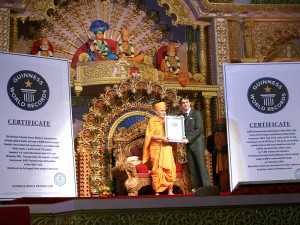 On 17 December 2007, Michael Whitty, official world record adjudicator and member of the management committee of Guinness World Records travelled especially to India to present two new world records to His Holiness Pramukh Swami Maharaj, spiritual leader of BAPS Swaminarayan Sanstha, an international socio-spiritual organisation affiliated with the United Nations.
The Guinness World Records Book is the biggest selling copyright book in history, with more than 100 million books sold around the world in more than 25 languages. This is the first time, though, that a senior member of the Guinness World Records management committee has personally travelled to India to present a World Record certificate. The presentation came on the occasion of His Holiness’ 87th birthday being celebrated as the culmination of the four-day BAPS Centenary Celebrations in Ahmedabad, Gujarat.

The following world records were presented by Michael Whitty to His Holiness Pramukh Swami Maharaj:

Most Hindu Mandirs Consecrated by a Single Person
His Holiness Pramukh Swami Maharaj, internationally revered spiritual leader and head of the BAPS Swaminarayan Sanstha, has created and consecrated, in accordance with Hindu rituals, a world record 713 mandirs (temples) in five continents between April 1971 and November 2007. Amongst these, the majestic, ornately hand-carved Swaminarayan Akshardham in New Delhi stands apart as the largest temple in the world.