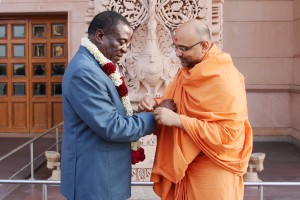 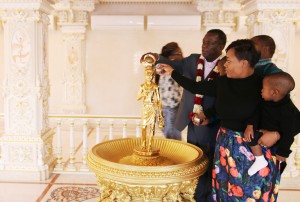 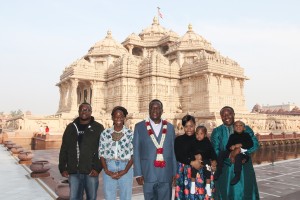 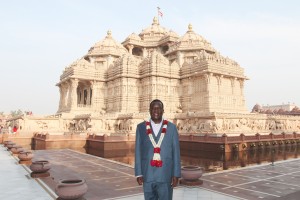 After admiring the Mayur Dwar (Peacock Gate), Vice President Mnangagwa visited the Swaminarayan Akshardham Mandir where they witnessed the world’s ‘Largest Comprehensive Hindu Temple’.  They offered their respects and admired the Mandir’s art and architecture.

Vice President Mnangagwa and family offered prayers for world peace and harmony by offering ‘abhishek’, the ceremonial pouring of sanctified water from 151 holy rivers, lakes and ponds across India on the sacred image of Sri Neelkanth Varni.

Thereafter, the delegation from Zimbabwe experienced the educational exhibition Sanskruti Vihar – a cultural voyage that sails through 10,000 years of India’s glorious heritage, highlighting India’s contributions to humanity through the ages.

Sharing his sentiments at Akshardham, Zimbabwe Vice President Honourable Mnangagwa wrote, “My visit here at this shrine has been the most outstanding landmark of my visit to the Republic of India. I carry with me back to Zimbabwe memories of both ancient civilization and modern culture which is extremely rich both in terms of content as well as its diversity. Both the cultural and scientific history is so rich and historical that this shrine is actually a center of excellence, which must be preserved at any cost.  Above all, the spiritual depth and love for peace and humanity is well preserved and in my view is a bedrock for future and present leader not only for India but the world over.”